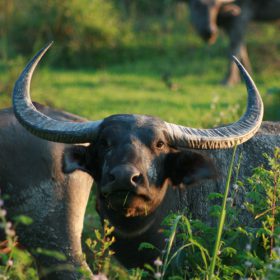 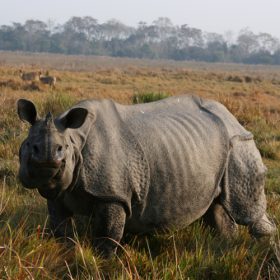 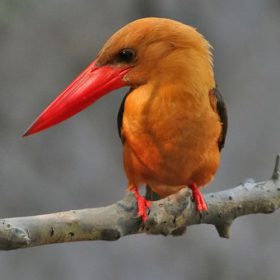 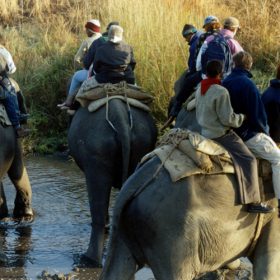 Day 1 – Arrive Kolkata
Arrive Kolkata and transfer to your hotel. Remainder of the day at leisure. Kolkata (formally Calcutta), situated on the eastern bank of Hoogly River, was once the capital of British India, and is now the capital of West Bengal. It is the gateway to eastern India. Conceived in 1686 it has had a turbulent history. Now the largest city in India it displays glaring contrasts: a curious blend of the old and the new, wealth and poverty, partly feudal, partly born out of growing urbanisation, partly un-definable.
Overnight at hotel. 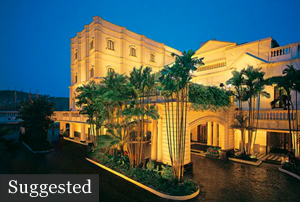 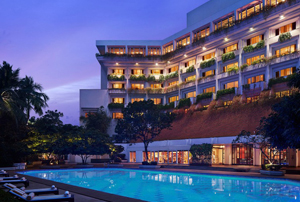 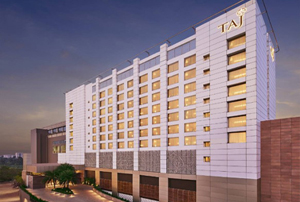 Taj City Centre New Town
Day 3 – Kolkata – Guwahati – Manas NP
Transfer to airport to board your flight to Guwahati. Arrive Guwahati and drive to Manas National Park. Located in the Himalayan foothill in the western Assam, Manas was originally a game reserve since 1928 and became a Tiger Reserve in 1974, a World Heritage Site in 1985, a Biosphere Reserve in 1989. Then declared as a National Park in 1990.
The park is contiguous with the Buxa Tiger Reserve in West Bangal and in 2003 it was declared part of Chirang-Ripu Elephant Reserve which serves as the international corrdior for elephant migration between India and Bhutan. Spread over an area of 500 sq. kms., the park has extensive grasslands and is famous for its unique scenic beauty.
Evening enjoy the walk near Beki River.
Overnight at the hotel. 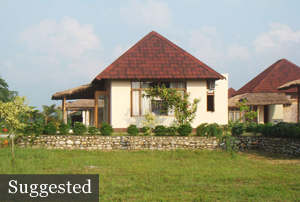 Musa Jungle Retreat
Day 4 – Manas NP
Morning & Evening game drives inside the park to explore Rich birdlife, wetlands which are among the most productive habitats around . Mid-morning if time permits go to visit an ethnic village near to the national park.
Overnight at hotel.

Musa Jungle Retreat
Day 5 – Manas NP
Today Early morning start to drive for about 1 ½ hr to Kakoijana Reserved Forest (with packed breakfast) to watch beautiful primate – the Golden Langur. It is an Old World monkey found in a small region of western Assam and in the neighboring foothills of the Black Mountains of Bhutan. It is one of the most endangered primate species of India. Spend the first half or the day at the forest.
Back to the lodge for lunch. Post lunch go for a jeep safari in Manas. Return to the lodge by dusk.
Overnight at hotel. 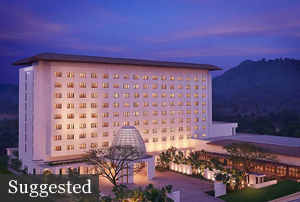 Taj Vivanta Guwahati
Day 7 – Guwahati – Balipara (Wild Mahseer)
After breakfast drive towards Balipara. Check into hotel. later if time permits walk around the lodge.
Spread over 22 acres of land and surrounded by tea gardens, Wild Mahseer is a British era tea bungalow nestled in Adabari tea Estate, the 145 years old cultural inheritance and Eastern Himalayan Botanic Ark. Named after one of the toughest game fish of the world, Wild Mahseer is the perfect heritage stay where history and nature is the host for the visitors.
Dinner and overnight at hotel. 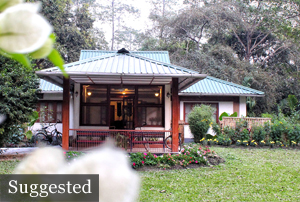 Wild Mahseer
Day 8 – Wild Mahseer – Nameri National Park day excursion (20 km / 45 minutes approx)
Early morning drive to Nameri National Park to trek inside the national park. Packed breakfast will be served on this day. Later return to the starting point and drive 25 km upstream and raft down the Jia Bhorelli River. Return to your hotel on the break of day light.
Nameri is a scenic park in the foot of Eastern Himalaya in the Assam-Arunachal border. It touches the Pakke Tiger reserve in the south-east boundary. The park has a great variety of mammals like elephants, tigers, Indian gaur, 4 species of deer, Capped langur etc. This park is also known for its birdlife. Nameri is the place to watch the elusive and endangered White-winged Duck. Among the other parks, Nameri has the highest number of this species in the world along with more than 350 species of birds.
Dinner and overnight at hotel.

Wild Mahseer
Day 9 – Wild Mahaseer (Balipara) – Kaziranga National Park
Today morning transfer to Kaziranga National Park by road. Kaziranga NP known for the world’s largest population of Indian One Horned Rhinoceros.
The UNESCO World Heritage site, Kaziranga National Park hosts two-thirds of the world’s Great One-horned rhinoceros also known for the highest density of tigers among the protected areas in the world and of course swamp deer (barasingha), Elephant and wild water buffalos too. Bordered by Brahmaputra River on the north and Karbi hills on the south, this nature reserve is one of the finest national parks in the country. Apart from the mammals, this park is also home to a variety of migratory birds, water birds, predators, scavengers, and game birds.
Dinner and overnight at hotel. 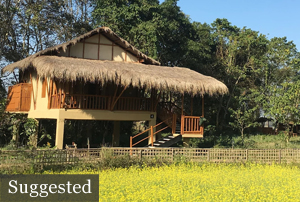 Diphlu River Lodge
Day 10 – Kaziranga National Park
Today morning and evening go for game drive inside the park. Lunch will be served in the lodge. Post lunch drive to Silghat to embark on your country boat to explore a small part of the mighty Brahmaputra River. Experience its scenic beauty with different avian species. Also watch out for the playful Gangetic River Dolphins. During the cruise your accompanying naturalist will help you to spot different birds and possibly Dolphins too. As dusk approaches, we will make our way back to Silghat. Enjoy your choice of tea or coffee with cookies as we approach the shore. Disembark and drive back to your lodge.
Note: Dolphin boat ride is exclusively for the in-house guests of Diphlu River Lodge. Dolphin boat ride is subject to availability. The lodge manager may change the itinerary according to the availability of the boat.
Note: Jeep safari in Kaziranga National Park will be exclusive on the basis of 03 – 04 people in 01 jeep.
Dinner and overnight at hotel.

Diphlu River Lodge
Day 11 – Kaziranga National Park B L D
AM & PM game drive inside the park.
Note: This is for your information that elephant ride is regulated and controlled by the forest dept. Govt. of Assam. As such we do not have any control for booking of elephant ride in advance. Every evening the Forest Department open the counter to distribute ticket for the next day early morning elephant ride.
Dinner and overnight at hotel.

Diphlu River Lodge
Day 12 – Kaziranga National park – Sibsagar (160 km / 4 hrs approx) – Dibrugarh (78 km / 2 hrs approx) B L D
Today after breakfast drive to Dibrugarh. Enroute visit the historic town Sibsagar, once the capital of the Ahom Kings, known as Shans who came from Thailand through Northern Myanmar to this area in early 13th century, and ruled for 600 years. The ruins of the Ahom palaces and monuments dot the landscape around this historical town centuries before the arrival of the British.
Overnight at hotel. 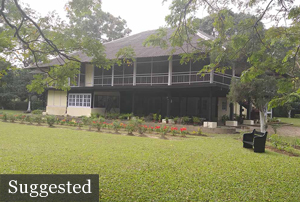 Mancotta Heritage Chang Bungalow
Day 13 – Dibrugarh – day trip to Namphake village B L D
After breakfast drive to Namphake village near Naharkatia to see and interact with the Tai Phake tribal community. Spread three-odd kilometers along the bank of the Dihing, a tributary of the mighty Brahmaputra, the picturesque village has an enticing old-world charm. It is the largest of the Tai-Phake villages in Assam, with around 70 odd families, which trace their ancestry to the great Tai race. The village folks speak a dialect similar to the language in Thailand and still follow the traditional customs and dress code of the great Tai race. The hamlet is also home to the Namphake Buddhist Monastery, one of the oldest and most respected Buddhist Monasteries in Assam. The villagers live in ‘changghars’ – bamboo and wood houses built on raised platforms and are mostly engaged in agriculture.
Later visit Digboi, the first oil town of South Asia. Visit the Oil Museum and the 2nd World War Allied Forces Cemetery where 200 graves are permanently maintained by the Commonwealth War Graves Commission.
Digboi is a small but wonderful town in Tinsukia district in the north-eastern part of the state of Assam, India. Petroleum oil was discovered here in late 19th century and the Digboi oilfield is one of the oldest oil fields. With a significant number of British professionals working for the Assam Oil Company as late as until the decade following the independence of India, Digboi had a well-developed infrastructure and a number of bungalows unique to the town. It has a world class golf course with 18 holes as part of the Digboi Club.
Overnight at hotel.

Mancotta Heritage Chang Bungalow
Day 14 – Dibrugarh to Kolkata
Today depending your flight timing Post breakfast, take a tea tour around a tea estate known for producing high quality CTC teas. Also experience of a Tea tasting session of different types of tea with one of the knowledgeable person in the field of tea / practicing Estate Manager.
Later transfer to Dibrugarh airport for flight to Kolkata.
Arrive Kolkata and transfer to your hotel.
Rest of the day at leisure.
Overnight at hotel.

Taj City Centre New Town
Day 15 – Kolkata – Home
Transfer to airport in time to board your flight back home. 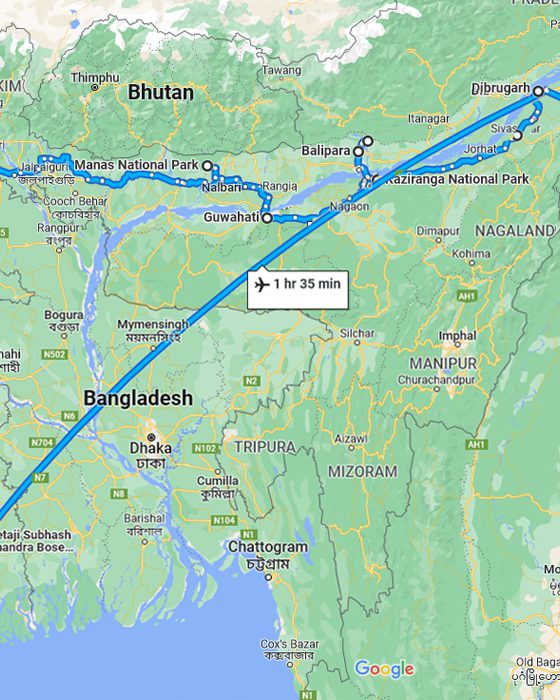